We wanted to change the appearance.

Bags, watches, stationaries, and wallets are all accessories that we use everyday. We could even add smartphones to items that are required to function daily. New developments in speed, features, and functions are released yearly; yet, we rarely find ourselves satisfied with the smartphones we currently use.

We needed to create a smartphone that could blend seamlessly into our daily lifestyles. We wanted to create a smartphone that enhanced our working and private times. Creating a device with texture that fits into our palms like a wallet or notebook is just one concept. When we get back to the original concept of NuAns, we can see a clear way on how we can alter smartphones for the better.

Smartphones on the market today pursue the same functions and design: the thinnest, the lightest, the biggest. We aimed to create the most advanced smartphone on the market by ignoring what companies on the market are building today.

NuAns NEO has our feelings woven deeply in its core, creating a proposal to a new digital lifestyle.

The desired change in a work style

Among the various lifestyle changes that the smartphone has influenced, the workplace lifestyle has been particularly interesting. Smartphones have brought revolutionary changes to our work, study, and creativities lifestyles. Yet creativity seems to be lacking in both smartphones and the personal computer.

Smartphones and personal computers have connected people two different worlds using the internet. Even though both the smartphone and the computer have its similarities, there has never been one unified world for users.

Windows 10 is the only platform that unifies your personal computer, tablet, and smartphone to one interface. No matter what device you use, you can easily edit, publish, and share information through OneDrive and Office Mobile.

Furthermore, when using the newly added function by Windows 10 called Continuum, you can easily create or edit a document in the NEO device just like a computer. If you wirelessly connect a display, keyboard, and mouse to NEO, Continuum will automatically format the screen size to whatever device you are using.

In trying to provide a new answer, Windows 10 offers an innovative new approach to the workplace making it the perfect choice when choosing the basic software for NEO.

Fit your hand and blend into your life.
Brand new design re-considering from zero

New advancements in technology are introduced daily. Innovative technology allows us to add a variety of functions to help the performance of the phone.

However, if the phone gets as thin as possible, does it make it easier to comfortably use each function? We wanted to make a phone with advanced technology that was comfortable in a user’s hand while still providing convenient functionality.

NuAns NEO became an industrial designed phone being comfortable to handle, visually stunning, and functionally sound. In lieu of seeking out the thinnest possible device, we substituted it with installing the latest technological advancements.

We cannot achieve that goal if we stick to the industry’s standard of designs. Producing a smartphone is not hard when following the cookie-cutter designs and thickness of every other phone on the market. We cannot find a new answer by making slight changes to existing designs and plans.

For that we designed NEO completely from the inside out.

The main circuit board is thinner allowing for a bigger energy efficient battery by incorporating newly acquired technology. We wanted to substitute the “thinnest” structure for a more efficient smartphone experience.

Taking advantage of not being the “thinnest” design.

We felt that when a phone is too thin, it became harder to fit comfortable in someone’s hand. Even if we spent our time on becoming the thinnest phone on the market, it would mean nothing if we didn’t first focus on its utility as a tool.

As companies make their phones thinner, many users tend to cover the phone with a stylish case. Therefore the thickness does not seem to matter to most users since many add more volume when adding a case.

It is natural for someone to want a comfortable phone when held as well as show off their own originality. Keeping that in mind, we came up with a concept to enough function ability inside and be comfortable on the outside. As a result, we created two selections for the outer surface of our phone; the interchangeable two tone panels or the flip cover. This revolutionary round-shaped body sits comfortable in your hand.

NEO commits to beauty for the detailed parts of the phones. The glass on the screen blends perfectly to the curvature of the phone to run flush against the body.

n the artfully designed body, people recognize that the USB Type-C, microphone, and headphone connectors as well as the speaker and strap holes run fluidly along the center of the phone. Not only focusing on the technology of the phone, but the comfortability as well.

Current phones on the market today have a thinner design to conserve electric power. However, we have given users enough battery without having to make it super thin.

It is important to conserve electric output to gain more battery life. However, the size of the battery does have an effect as well. In a thinner phone, you are there is typically a smaller battery.

A thin light phone doesn’t become very convenient if people have to constantly carry around a mobile battery.

NEO is equipped with a 3,350 mAh, high-capacity, battery with power saving technology. Window 10 mobile is efficient with battery life letting users use their phone for two days before having to recharge.

Adapting the latest technology as a common tool

The easy-pay method using a smart card such as Suica, PASMO, and Nanaco has had a bigger influence in recent years around the world. In keeping up to speed with technology, NEO has installed a mobile wallet called Osaifu Keitai to allow for easy-pay.

We also didn’t forget the importance of having a space for an IC card or commuter pass for those who do not use their smartphone for payments. To incorporate the traditional ways, we designed a spot to store one card under the interchangeable panels. An NEC antenna is located on the card slot to keep record of activity.

We focus on using the latest technology to design a phone that fits people’s daily use and lifestyles, not to be the thinnest on the market. 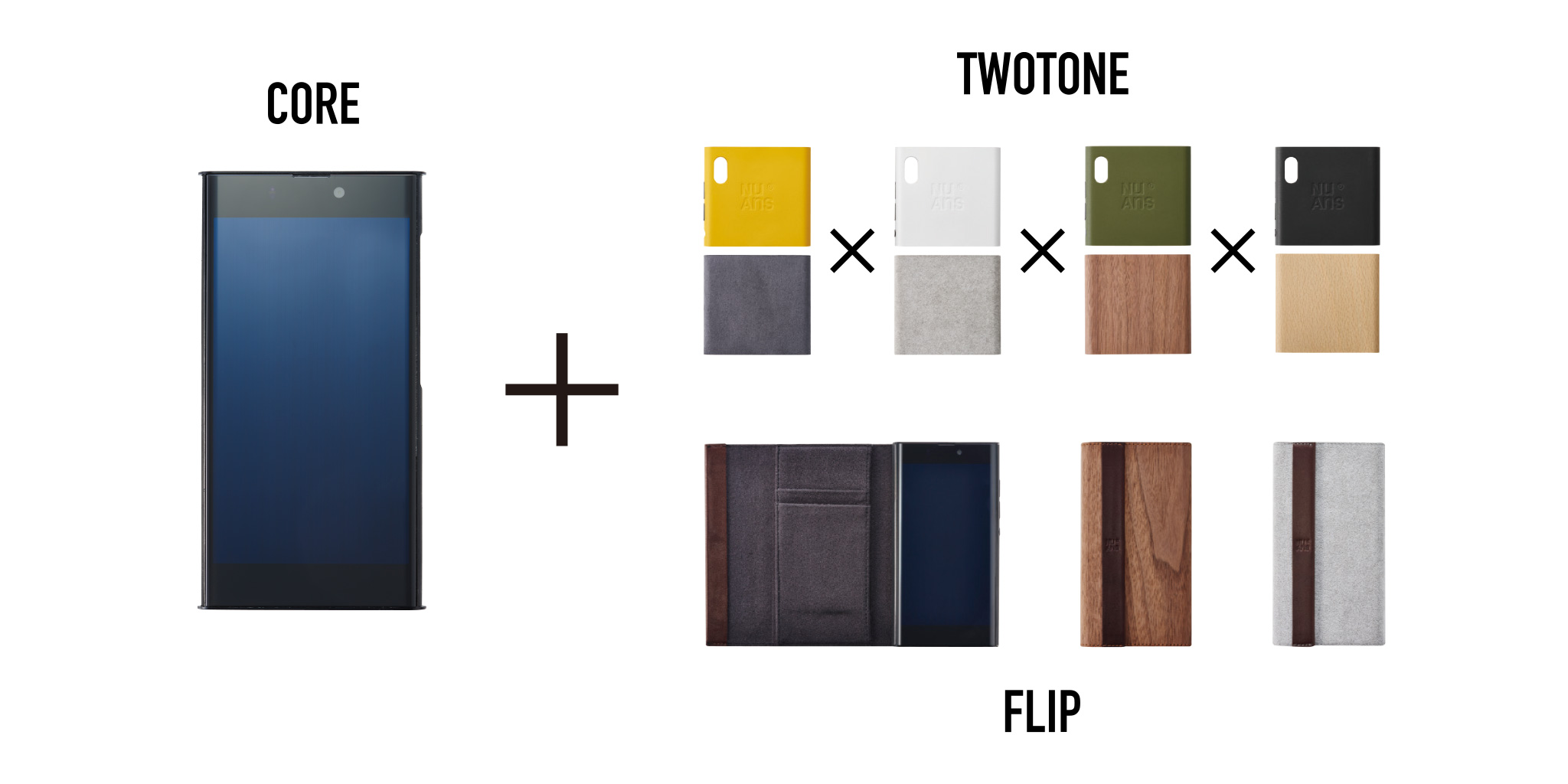 The “CORE Concept” behind the various utilities and personalization

We added various accessories to the smartphone to allow users to get creative depending on what they plan on using it for.

We came up with the concept of “CORE”, which separates the inner components from the outer components when designing the phone.

Many companies compete by trying to make their phones the thinnest, lightest, and prettiest. However, most users cover their phone with a case. Many encase their phone in a case and wallet combo, leaving it bulkier than the original design.

NuAns NEO primary goal is to organize the relationship of the smart phones and its accessories, ultimately making it one complete design. The CORE concept is having the hardware serve as the aggregate functionality of the smart phone, leaving the exterior free for users to express themselves.

The primary function of NEO is to consolidate the body portion of the phone that is named the "All NEO CORE ". In addition, we 've prepared the exterior to meet two different needs. 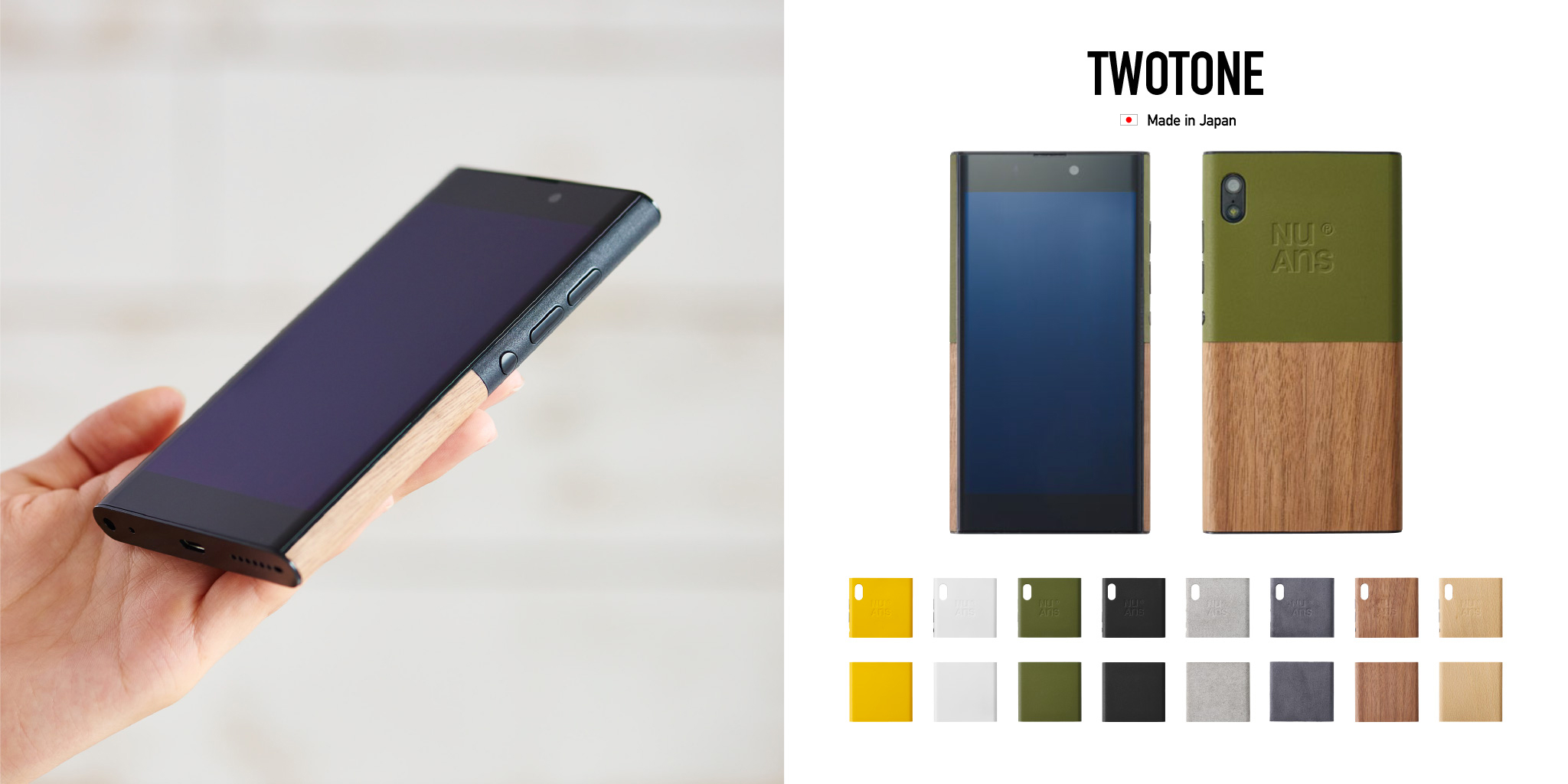 TWOTONES, interchangeable depending on your style

The desired feeling when holding the smartphone depends on the user.

With our interchangeable panels, you can choose between smooth, warm, and natural materials.

In addition to the easy to customize design, your IC card can be conveniently removed and replaced by simply removing the bottom panel. 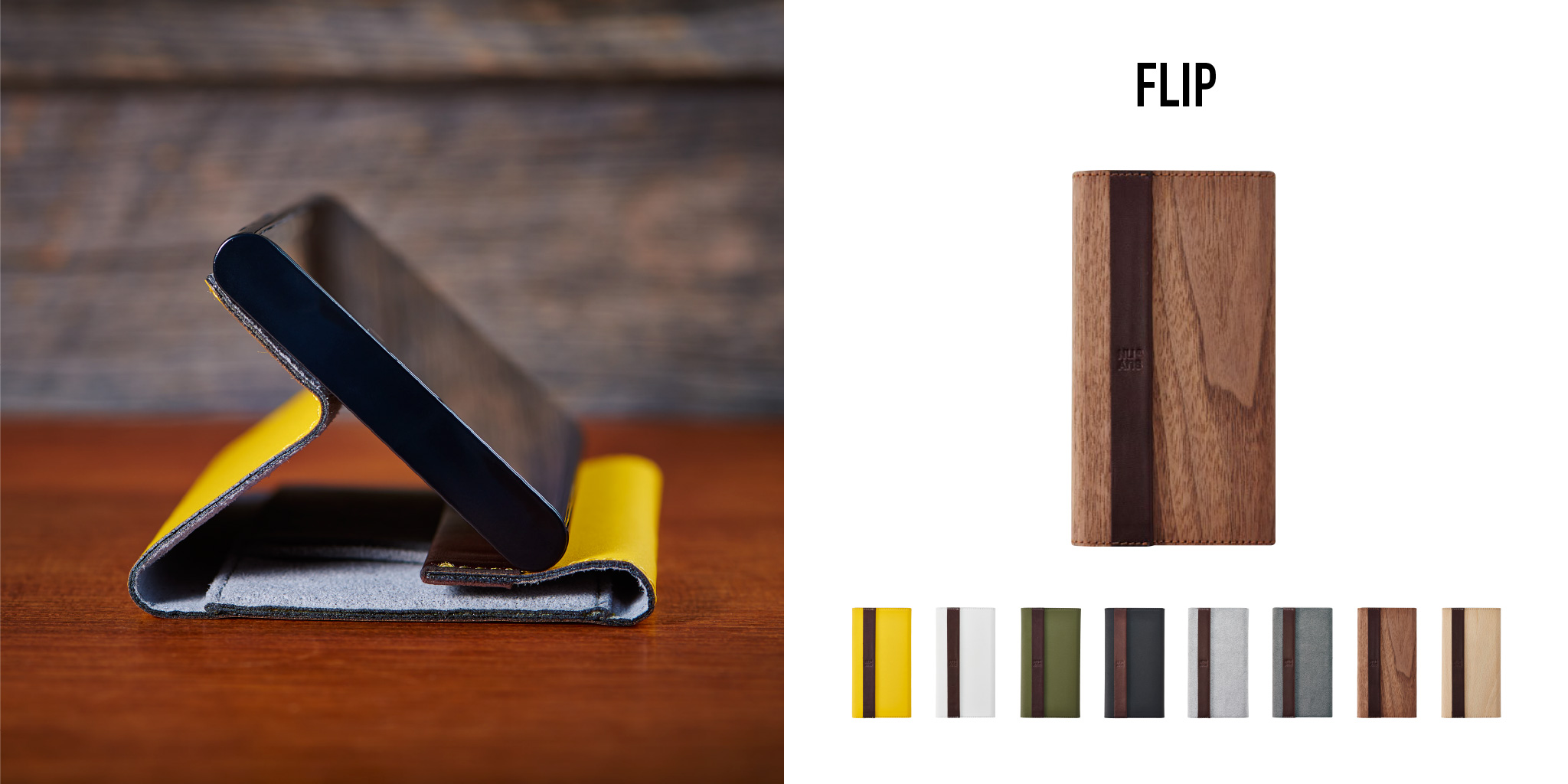 FLIP, hide the presence of device

Some people want to be able to card multiple cards with their phone, so they purchase a flip case with card slots on the sleeve. Therefore, we designed a case that has two extra card slots with a larger storage pocket in addition to the IC card slot under the back panel.

We wanted to alter the appearance of the device, which felt cold, with a flip case. Using fabric and natural materials, the cover immerses everything from the camera lens to the buttons. 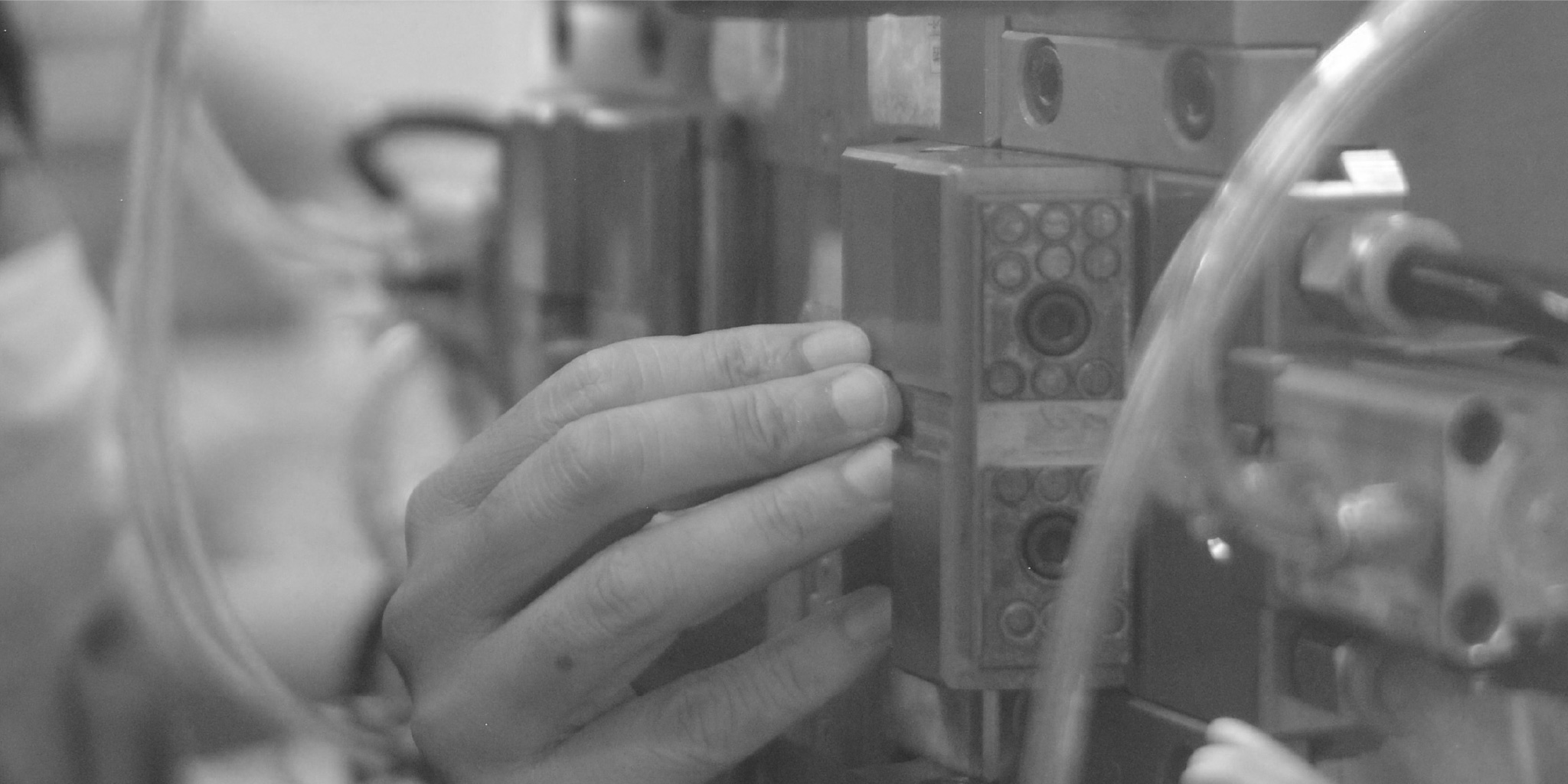 Material and Production Techniques in the Search for ‘Real Texture’

We wanted our main focus to be on the appearance and texture of the device; no matter what the device was. In addition to the daily functions of the device, we find ourselves simply holding it more often than not. For that reason we decided that NuAns and NEO were going to bring aesthetics and texture to life.

However, that does not mean we simply stick to natural materials.

We found that the felt, also used in mobile batteries as a flame-retardant barrier, had a comfortable natural appearance and texture. We decided to apply the same felt material used in the NuAns series to the NEO.

We thought it was necessary for wood to be one of the main materials used when we noticed the harmony between NEO and wood. However, natural wood is not the easiest material to work with when making it one of the standard plates for the outer surface It is because the problem of weight, heat dissipation. Is there any other materials that can provide texture and still keep the device functionally sound? We found a Japanese material called Tennage®. This ensures that the material is of higher quality and is more durable that using just natural wood. Two color tones are available, Buna and Walnut, to blend in with any furniture around you.

Tennage® is a registered trademark of Zeroone products Inc. 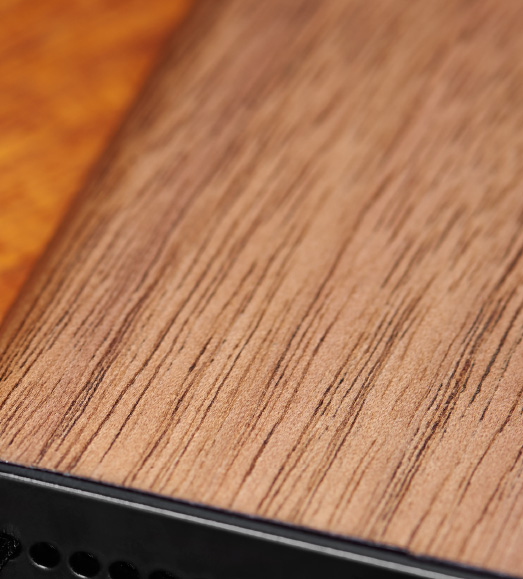 Clarino® was developed as an artificial leather for shoes in the 1960s. Its quality, function, and texture have greatly improved due to customer demands. By using Clarino®, we can offer a texture that is scratch and water resistant.We chose to stick with the four standard NuAns colors that fit the natural world around us: black, white, khaki, and saffron. 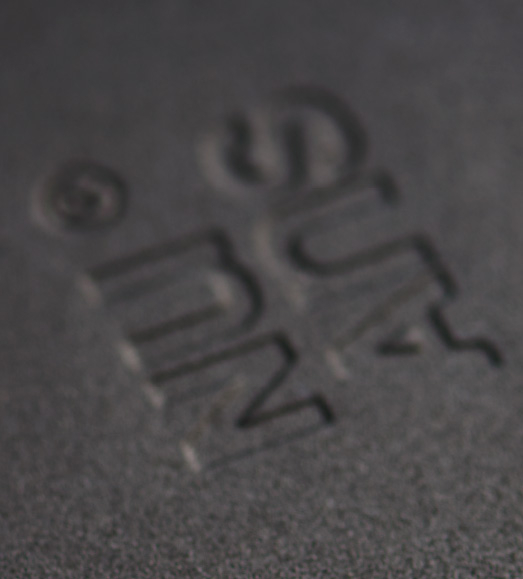 We chose Toray Industries Inc. Ultrasuede® called ecsaine, an artificial leather which is densely intertwined with a bundle of micro fibers mimicking natural suede. The stain resistant durable texture is of higher quality than that of natural leather.

The material is a singular colored matte texture where the raised fabric’s surface alters its appearance. We thought of ways that we could add nuance to the suede material. The special process used in the Ultra Suede®, which was used for NEO, produces a leather like feeling on the black and white fabric. It almost resembles natural materials when nuance is added.

Ultrasuede® is a registered trademark of Toray Industries, Inc. 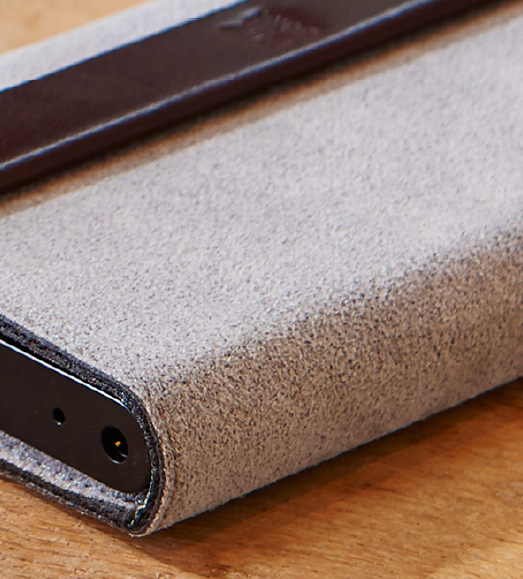 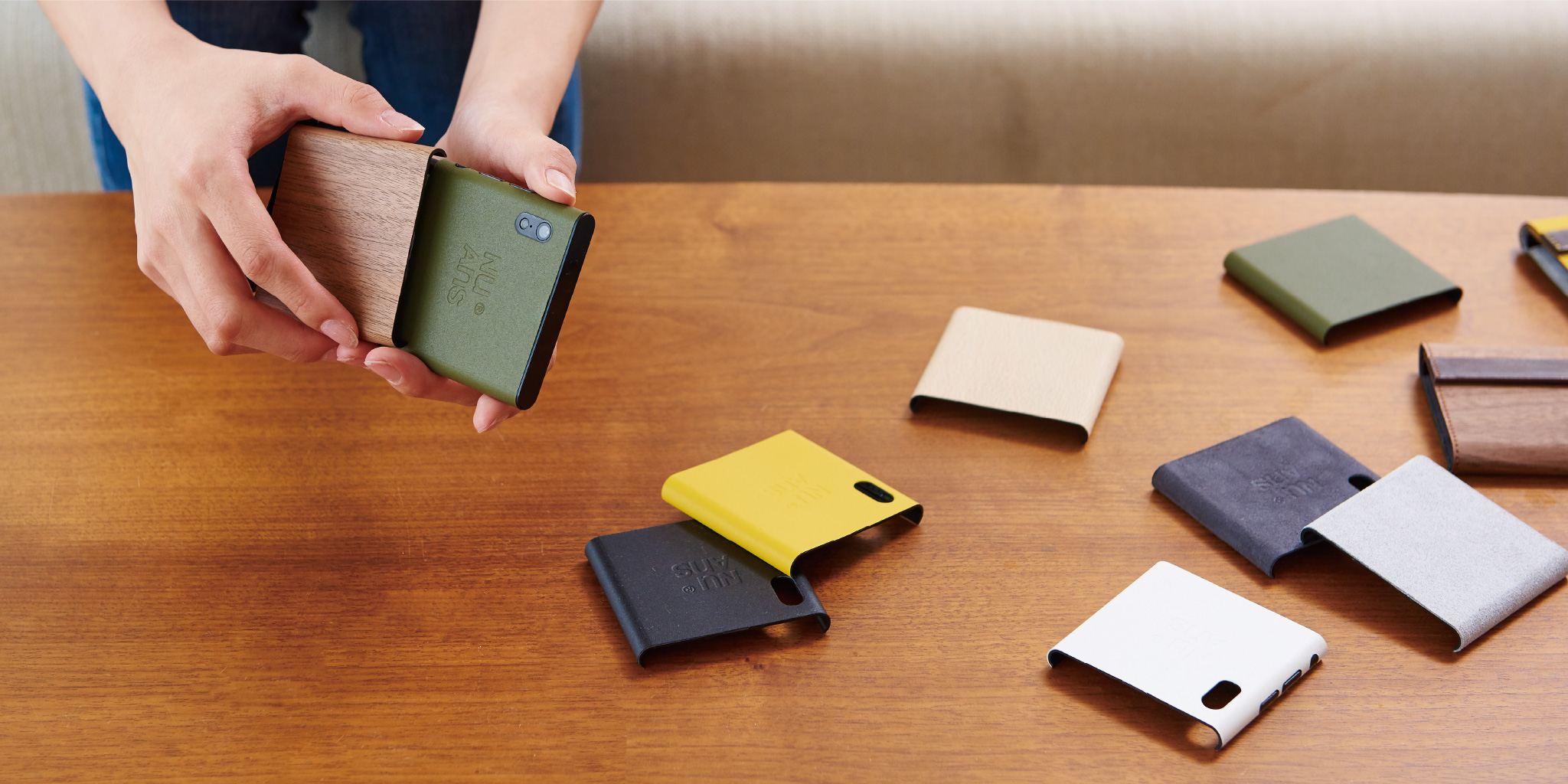 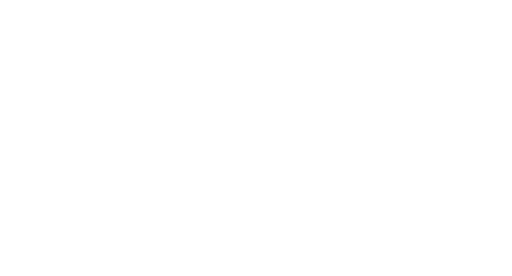 NEO only for you

CORE, which becomes the center of NEO was designed on the concept that it can be integrated with exterior of the phone. Just like changing into clothes everyday, you can change the exterior depending on the application of the phone and style you desire.

Go to the simulation page ＞